>Tis’ the season for giving and that’s exactly what Niagara Cooks is hoping to do. Author Lynn Ogryzlo has purged her wine library of over 100 titles and offering them up for a donation to The Craig Award.

Here’s how it works. You pick a title you’d like and it’s yours for a donation. Some titles have a $10 price attached to them and that’s the least amount of donation accepted, others with no amount you can have for whatever you’d like to donate.

The books are lovingly read and lightly handled so most of them look as good as new, there are however, a few with a look of being thoroughly loved.

Choose from the eclectic pile that includes anything from The Oxford Companion to Wines, by Jancis Robinson to Wine Tastes, Wine Styles by Andrew Jefford. There are books on South Africa and others on health, like The Save Your Heart Wine Book. There are some by Simon & Schuster as well as William & Sonoma. There are books about cooking with wine, tasting wine, learning about wine and lots of coffee table style books from the experts; all great for holiday giving for an aspiring student, an eager enthusiast or a winetasting pro.

The Craig Award is a new research scholarship program funded by the Ogryzlo’s and run through Niagara College. It’s to financially encourage students and farmers to work together on innovative agricultural projects that have a positive outcome for Niagara’s local food culture.

Please join the Ogryzlo’s this holiday season, give the gift of wine and food reading while creating a stronger local food community in Niagara.

For a listing of the books, go to www.NiagaraCooks.ca 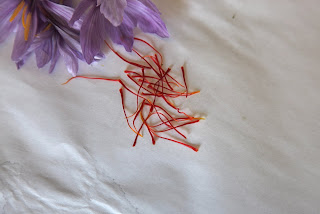 It’s saffron harvest season in Niagara! Robert and Melissa Achal of NOEB Lavender on Niagara Stone Road in Niagara-on-the-Lake are in full saffron harvest. Over 400 pots, each with one crocus bulb bloom intermittedly and Robert has to hand harvest each one.

The harvest runs from mid November to mid December, these little pots burst with beautiful blossoms. It’s Robert Achal’s job to pick each flower, open it up and remove the 4 stamens waiting inside each one of them.

Robert is originally from Figi and everything he does from growing his exotic plants and making them into lines of cosmetics are traditions he learned from his home country and from his grandmother who is an herbalist in Figi.

The worlds largest saffron production comes from Iran. It’s where Robert got his crocus bulbs. Every second year the bulbs are divided and there are waiting lists of companies waiting for the division of the bulbs so they can begin their own saffron production. Robert put his name on that list and in October, they arrived. The new bulbs usually take a year to flower but amazingly, they began to bloom in November. “They must like their new home”, says Robert. 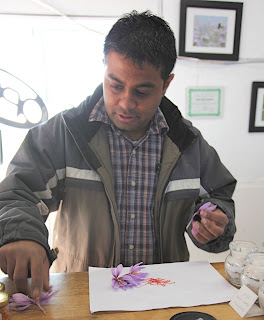 The saffron harvest runs approximately 4 weeks. It starts when the flowers begin to bloom and ends when they no longer bloom. Each bulb can give off 3 to 4 flowers during harvest. Robert himself hand harvests his crop every day. He refers to the crocuses as a fall crocus. It’s is not the kind you grow in your garden, if you use the wrong kind of crocus stamen it could be very poisonous.

To harvest saffron, the entire flower is pinched off the stem of the plant, then each flower is opened and the stems removed very carefully. If a saffron thread is broken upon removal, it is useless, so each one is handled very delicately. A saffron stamen goes from red at the bottom to orange at the top and the redder the saffron, the higher the quality.

To cook with saffron you must soak real saffron in water before you use it then pulverize it with a mortar and pestal. Then you’re ready to add it to dishes for amazing colour and flavour. It’s great in a saffron curry sauce, you can make a saffron cake, it goes well with lamb and seafood pastas and of course the quintessential saffron dish is Bouillabaisse. 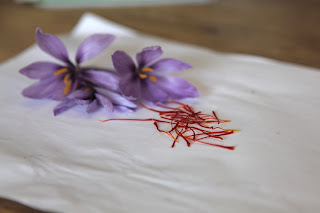 Robert is happy to be growing the real thing. For a few years now he’s been growing what is known as a “poor man’s saffron” or Egyptian saffron. This is really a Calendula flower and not a crocus. It doesn’t bleed like real saffron so it doesn’t colour a dish as well. The flower petals are dried and cured and as it does this, the petals shrivel into threads that look like saffron. It’s a great substitute, but it’s not the real thing.

Crocuses are beautiful, delicate little flowers and as I gaze at them in Robert’s greenhouse, appreciating their beauty, I wonder who thought that removing the little stamens, drying them and pulverizing them would make a great ingredient in seafood dishes. I don’t know who had such an amazing mind, but I’m sure glad they did.