It seems to me that whenever anything needs doing these days, the popular question of the day is “how”. But in my opinion, we need to be asking “why”. I mean, in everything we do, we should ask ourselves “why am I doing this?” Because if we asked ourselves “why” we are doing something, we may realise that some things are worth doing more than others. 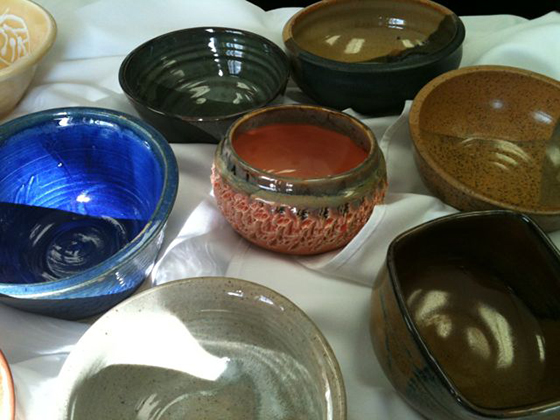 So what does all this have to do with soup? Well, Niagara potters made over 100 soup bowls so hungry soup lover could gather at the Four Points Sheraton Hotel in Thorold on Wednesday, March 26 to taste some pretty sensational soups made by chefs who were competing for the coveted Golden Ladle Award. The event is called Empty Bowls.

Mind you “great soup” would be a good enough reason for me to attend but there was another reason that took a back seat at this delicious event. Bethlehem Housing and Support Services. Bethlehem is a 27-unit apartment building that gives hope to men, women and children that find themselves with no other place to turn.

I can’t imagine being desperate and destitute, but unfortunately almost 4,000 people in Niagara find themselves there. Bethlehem gives some of them a place to live and retraining so they can pull themselves up and go on to become contributing members of our community again. These people are our neighbours who need our help – that’s the “why” that brought a lot of people out to bid on silent auction items, gamble on raffle tickets and enjoy bowl after bowl of delicious soup.

There was a chicken wing soup and a soup with candied pecans, some had slabs of beer bacon and others chunks of lobster, I loved the ones with an essence of cilantro and the spike of heat. The 11 soups were sensationally creative, all were different and yummy great.

I loved the Black Bean and Beer Bacon Soup with Crispy Tortilla Strips that Chef David Watt of The Garrison House prepared. The flavours were balanced and the texture crispy and delightful – yes a crispy soup! 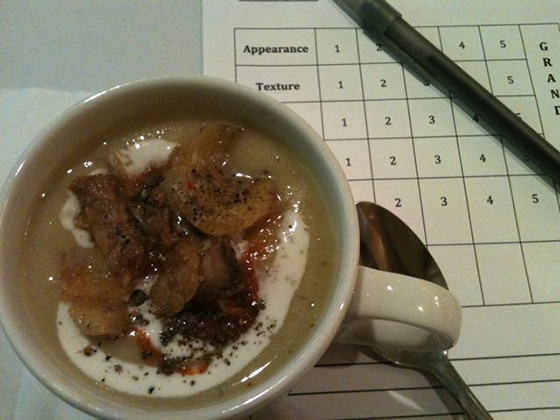 Then Chef David Gibson of the Canadian Food and Wine Institute at Niagara College wowed us with his Roasted Parsnip and Leek Soup with Dragon’s Breath Cream. It looked seductively tempting with a great garnish presentation that followed through with an amazingly flavourful soup.

You should have been there to try the Bell Pepper Ying Yang Soup with Cardamom Cracker made by Chef James Cuttriss of The Heat Is On Catering. It was spicy, balanced and oh, so delicious! 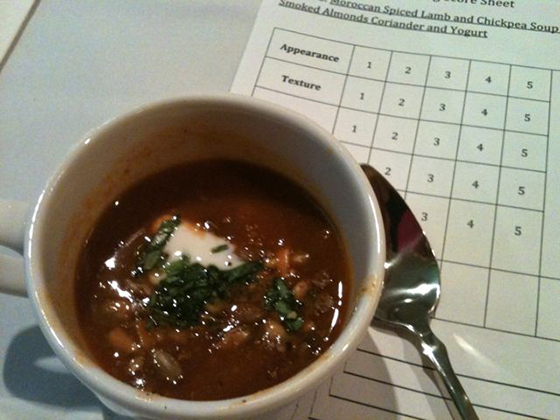 So who won? It was Chef Michael Price of White Oaks Resort for his Gayzley’s Chicken Wing Soup.

For the price of a nice dinner out, the folks who decided on this event not only got an unlimited amount of gourmet soups and wine to sip and savour all night, but they also gave back to their community and helped our neighbours who are in need. 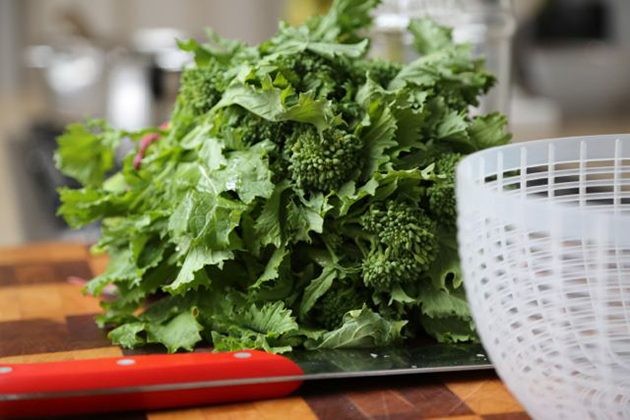 I was wandering around the produce section of my neighbourhood grocery store wondering what I wanted for dinner when the bright, freshness of a bunch of rapini caught my attention –I just had to have it. It was a damp March day and that rapini was making me crave soup.

When I got home I pulled some of my favourite Italian sausage from the freezer, an onion from the cold cellar and a can of Cannelli beans from the pantry. Put it all together with some chicken broth and a sprinkle of Parmesan cheese and my dinner was a hearty Tuscan bean soup with rapini and sausage – yum, oh yum! 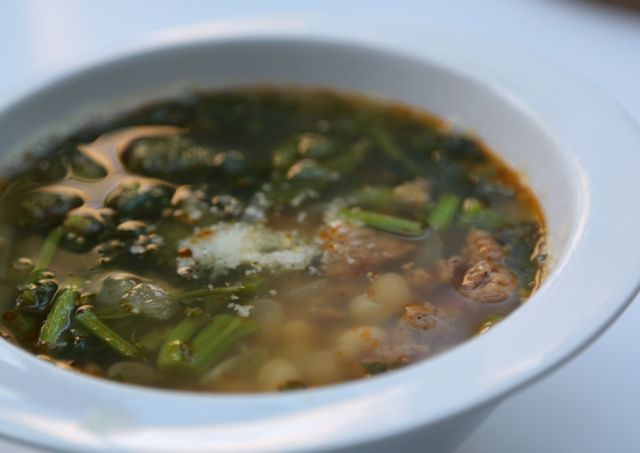 One of the greatest things about soup is its versatility, adaptability and international flair. If you ate soup every day of the year, chances are, you’d never have the same soup twice.

You could start off a Mexican Posole made with pork or chicken, broth, and hominy or a Russian Borscht soup made with fresh beets and served with a dollop of sour cream. The ever-popular Minestrone is but one of the dozens of delicious Italian soups you can make in minutes or you can go with a lighter Chinese Won Ton soup of clear broth and dumplings. International soups are no more difficult to make than your favourite standbys. In fact, many of them are simpler and quicker! 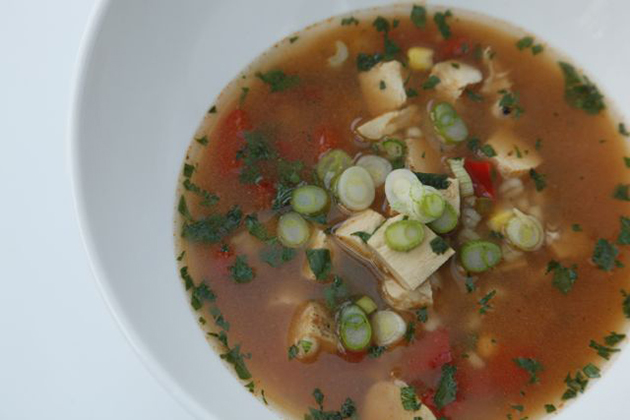 Nothing goes better in the spring season than a quick, light bowl of Hot and Sour Chicken Soup. Simply dice the chicken or use left over chicken, diced. Then add some chicken broth, lemon grass, lime zest and diced red chile and bring to a boil. Simmer for 10 minutes and strain the broth. Return the clear broth to a pot and add the chicken and a can of diced tomatoes and simmer until chicken is cooked, about 5 minutes. Stir in some extra flavourings such as lime juice, parsley and garnish with thinly sliced green onions! A delicious soup in less than 20 minutes!

You can pick any soup recipe from around the world or you can improvise with staples you have around your kitchen. You can substitute, increase, decrease, exclude, and include ingredients to your heart’s content without fear of disaster, but there are a few tricks to keep in mind next time you pull out your soup pot.

If you find a recipe that tells you to sauté or roast vegetables before you add them to your soup pot, then know this is a winter soup recipe. Roasting caramelizes the naturally occurring sugars in root vegetables, giving them a much richer, deeper and more robust flavor. It’s a fantastic tip for flavour but tuck that recipe away for the winter season. 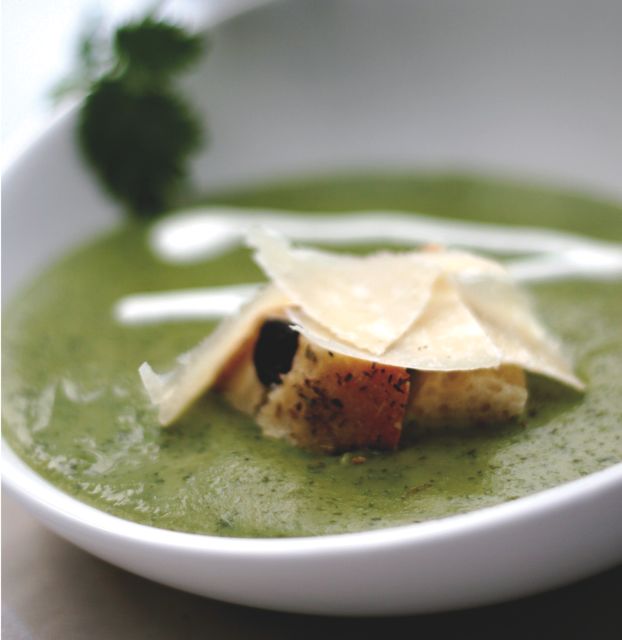 To thicken a creamed soup without using cream, simply add more vegetables. The more vegetables you have in your pot relative to the liquid, the thicker the soup will be. An immersion blender is an easy way to puree a perfectly smooth soup making for added texture and richness.

Almost all soups when they’re stored in the refrigerator will improve in flavor the next day. The exceptions are soups made with seafood because the delicate flavours tend to fade away and when you reheat them, they get that overcooked flavour. 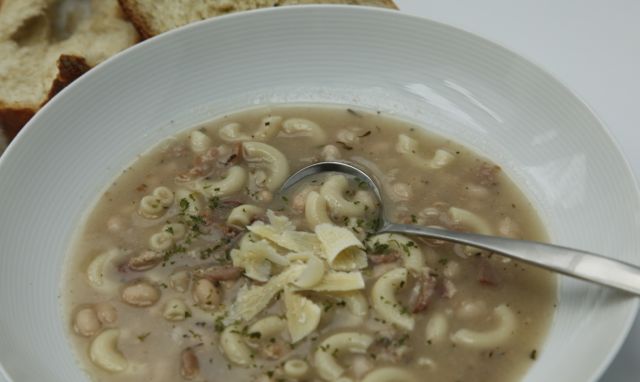 In fact, Ribollita, the popular Italian soup which means “cooked for a second time” or “reheated” is named because the flavours became much better the second day. In the Tuscan countryside, it was the custom to keep a pot of Ribollita on the stove for a few days.

A delicious bowl of soup is a wonderful, winter, stick-to-your-ribs kind of meal with an array of flavors, textures, and nutrients from every food group. The next damp, spring lazy day plan on making a quick soup unlike any other that has ever passed your lips.

For inspiration, join me at this years Empty Bowls, Niagara’s best soup event. Over 25 chefs compete for the best soup. Bowls are made from local potters and chefs get creative in the pot. It’s for a great cause, Bethlehem Housing and Support Services. Here’s the poster and scroll down for my grocery store inspired soup recipe. 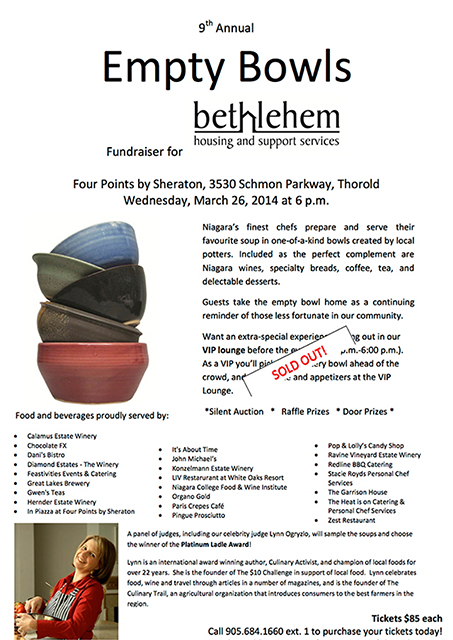 Meanwhile, cut off the tough ends of the rapini, then chop the stalks and leaves into small chunks. Add the chopped rapini and cannelli beans to the saucepan. Bring to a simmer and cook for about 5 minutes, until the rapini leaves are wilted and the stalks are slightly tender. Season with salt and crushed red pepper, as desired. Serve with a sprinkle of parmesan cheese and a hunk of doughy French bread. Serves 4.

Just drive down an old country road, roll down your window and take a deep breath. The wind is brisk, fresh and clean. The air is filled with a sweet lingering mist. Now close your eyes and concentrate. The pervasive aroma wafts across your palate making you run for the nearest pancake house – it’s maple syrup season! 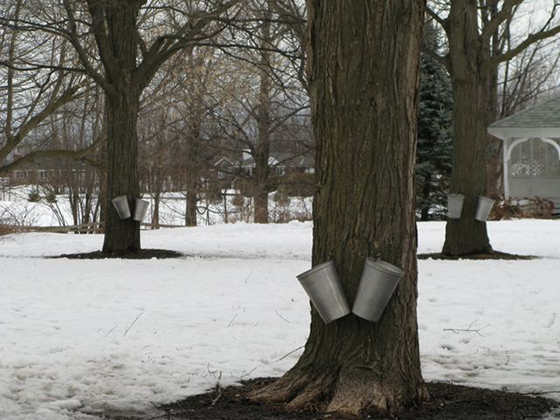 From the mid 16th century to the present, Canadian maple syrup has played an important role in Canadian cuisine. The thick, super sweet golden nectar with a caramelized taste is considered to be an ideal candidate for fine foods because of its rich texture.

From gourmet foods such as maple glazed meats to crème brûlée to rich and sweet snacks like maple ice cream and fudge, Canadian maple syrup had been, and still is, an important ingredient for creating some of our most delicious dishes.

In Canada, Ontario, Quebec, New Brunswick and Nova Scotia produce an incredible two-thirds of the world’s supply of maple syrup with the United States supplying the rest.

Canadian cold winters freeze the sap of the indigenous maple trees and in the spring when it thaws, the trees are tapped and the sap collected. Then it’s boiled down into a luscious, heavenly, silky sweet nectar. You can identify various grades of maple syrup by sight and flavour. The lightest is the most elegant. Medium-grade has a muscular flavour with a finesse to the body. Amber (dark) is full, rich, mouth-filling, and robust in body and texture. 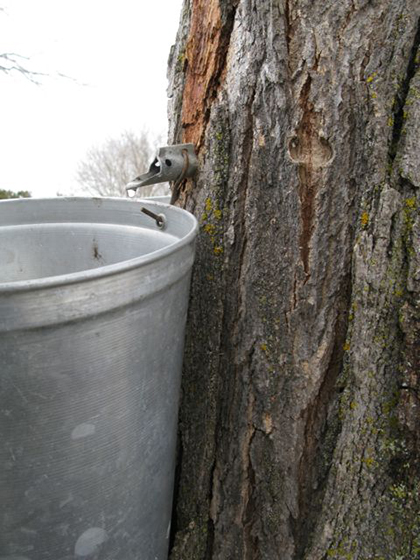 Maple syrup can be produced anywhere in the province where there is a grove of maple trees. If you have maple trees in your yard, you can even tap them and make your own maple syrup. When the trees are tapped for the sap, it’s known as a sugar bush. Lanark County (west of Ottawa) is the maple syrup capital of Ontario and now they’re the Guinness World Record holder.

“Wheelers already achieved recognition in 2009 with a National Historic Plaque for paying homage to our nation’s maple history through its museum and display,” said Marie White, Lanark County Tourism manager.

“Lanark County is home to dozens of maple operations showcasing some of the best ‘liquid gold’ in Canada,” Ms. White adds. “We have award-winning syrup makers here, along with several sugar camps offering activities, food and demonstrations. We are immensely proud of our maple history!”

To get the most flavour from maple syrup, warm it first and pour it over a steaming stack of pancakes or thick, juicy slices of roast pork. Warming maple syrup brings out its full aroma and flavour. For a truly decadent and exquisite experience try these recipes. 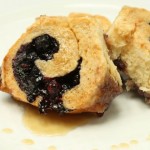 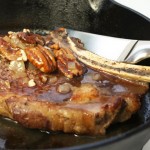