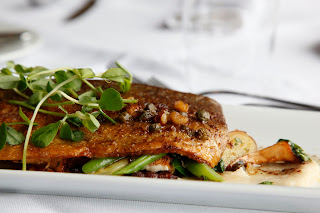 Six Thirty Nine is an exciting new restaurant on 639 Peel Street in Woodstock, Ontario. Chef and Owner Eric Boyar is young and deliciously talented. I found Eric in the kitchen on his day off, so I sat at the Chef’s Table and he treated me to a new dish he’s putting on his menu.

The Chef’s Table is a beautiful wooden bar much like a butchers block with 4 bar stools that face the kitchen and large window that brings in the beautiful outdoor gardens. I perched myself at the bar and watched as the chef made a local dish from some fresh rainbow trout he’s just picked up that morning.

Boyar has a passion for flavour and that motivates him to go beyond what many chefs would. The back pantry is filled with baskets and bags of fresh vegetables he just picked up from the market and I love it – his bicycle is leaning up against the cupboards – he’s a wholesome chef who treats his customers to his wholesome cooking! But don’t be fooled, wholesome in my world never tasted this amazing.

He served me a bowl of Truffled Mushroom Soup and Duck Confit, I suppose in a chef’s kitchen you can never be without food. He started to prepare his rainbow trout dish.

Six Thirty Nine Restaurant was a home transformed in 2005 into a modern 28 seat restaurant with a sleek sexiness and welcoming appeal. Boyar is classically French trained and inspired by farms and fresh farm produce from his childhood of working on farms. The duck in the soup came from Everspring farm, the pea shoots from Sleger’s Organic Farm and the mushrooms from a farm on County Road 54.

As Boyar moved around his extremely well organized and neat kitchen one task flowed into another with the grace of movement of a dancer. He was amazing to watch, dusting the skin side off the trout sharing some tips with me. “Don’t dust the flesh side of the fish because crisping up that side tends to dry it out”. He warms a mixture of butter and olive oil in a skillet and lays the fish, skin side down and leaves it to work on the rest of the dish.

He takes some previously blanched vegetables and warms them in more butter and olive oil. He adds some home smoked bacon, chantrel mushrooms and when he’s content with his flipping them around in the skillet, he finishes it off with a tiny bit more oil and a handful of Swiss chard.

For now the dish is jokingly called Trout a la Eric and it’s an impromptu dish of his favourite ingredients. He pulls warm dishes from his oven and spoons a large smear of cauliflower puree on the bottom. On top of that he adds the vegetable mixture and to my surprise he adds some green and yellow beans he had going in another skillet.  On top of it all, he lay the trout fillet which was now cooked to perfection.

Now wouldn’t all of us love to have a chef cook amazing and brilliant dishes like this for us all. The meal was an interplay of textures and flavours that comforted the palate and soothed the soul. The beans were fresh and clean, the bacon veggies were savoury and warm, the cauliflower puree luscious and creamy and the trout clean with a bright buttery flavour. They all came together in one sophisticated mouthful.

As well as delicious the dish read like a geography lesson; trout from Goossens in Otterville, fingerling potatoes other veggies from Tim Creton’s Vegetable Farm in Tavistock, the beans and cauliflower from the market, pork belly for the bacon from Rudy’s Meats and the sprouts from Slegers.

Six Thirty Nine Restaurant is definitely work the trip to Woodstock. Book the Chef’s Table ahead of time and remember it only seats 4. In the summer they have a 16 seat patio in a beautiful garden.