Driving through rural Louisiana in our little minivan we passed by drive-thru daiquiri shacks. They were everywhere. In downtown New Orleans you can find daiquiri bars on almost every street corner. They’re like slushies with alcohol or as I overheard on the street, like a “7-ELEVEN slushie with booze”. 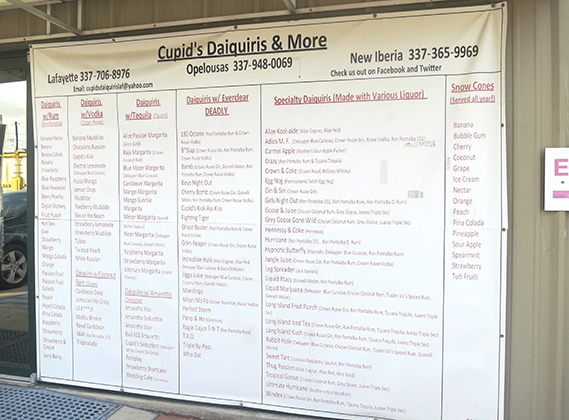 You can get frozen daiquiris in a big gulp cup on almost every street corner. Fat Tuesdays in the new Riverwalk Outlet Mall boasts a wall of slushie machines, all churning different coloured and flavoured slushies – or no, they’re daiquiris! You can choose from dozens of different flavours and because you never really know how much alcohol is in them, they tend to sneak up on you. And yes, you can buy one and walk around anywhere sipping on a really cold, frozen, alcoholic drink. In fact, I’m living proof that they really do encourage the shopping spirit.

At the drive-thru daiquiri shacks it works like any other take-out establishment with their menu plastered on the outside of the building. At some, there are more than 50 different frozen daiquiri choices from vodka, gin, tequila and specialty (killer) daiquiri cocktails. 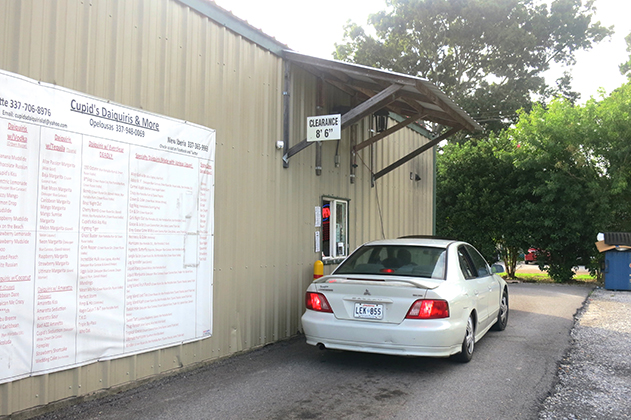 New Orleans frozen daiquiris are an evolution of the pure Cuban daiquiri of white rum, lime, simple syrup and ice. They were fashionable in the 1940’s; everyone drank them, including Earnest Hemmingway. Like the martini that went from gin, sweet vermouth, and orange bitters to anything in a glass that ends with “tini”. 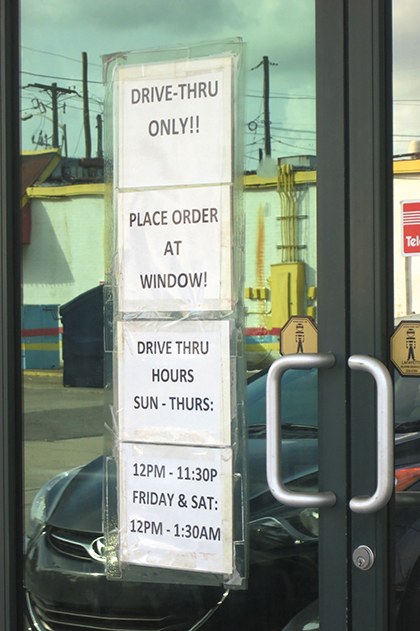 Frozen daiquiris on the go are more popular than ice cream on a hot New Orleans day. Not knowing the difference between frozen daiquiris and the real thing, I made the mistake of asking for a daiquiri to go at my hotel. Hotel Monteleone has a beautiful carousel bar that rotates every 15 minutes. It’s the only carousel in the world you need to be 21 to ride. I ordered a daiquiri-to-go and the bartender was a real sport.

I see my mistake now, sitting in the safety and comfort of my writing desk it’s all so clear now, but little did I know how vulnerable I was at the time. Keep in mind that frozen daiquiris are sluhies with alcohol as I share what happened next.

Hotel Monteleone is a first class establishment and no place for an evolution of anything, especially a faux daiquiri. I watched as the bartender measured ingredients and shook this true daiquiri vigorously. Then he poured the small amount of ingredients that would normally fill a fancy cocktail glass into a styrofone cup. The liquid measly filled the bottom third of the cup. As he stood back I could almost hear him contemplate my reaction of being charged twice as much and being two-thirds shorted. So he did what any self-respecting bartender would do. He picked up the white rum bottle and filled the cup two thirds full.

I set out on foot into the hot New Orleans sunshine in mid-afternoon with an empty stomach and I began sipping away on my delicious drink that was two-thirds rum and one-third daiquiri. I felt the walking adrenaline rush of this illegal act run through my veins and it quickly turned into an inebriated swager as the excessive amounts of alcohol hit my empty stomach and vaporize throughout my body in the New Orleans heat. I got to the first street corner and leaned on a street pole for support. I looked up and spotted my favourite shoe store across the street. The excitement was like seeing an old friend after decades apart and yes, New Orleans ended up being five pair of shoes short that afternoon.

While drinking and walking may offend the sensibilities of some Canadians, partying is in the DNA of New Orleans!

Back at my writing desk it’s all so clear. I should have gone to a daiquiri shack and ordered from the dizzying variety of flavours that come in sizes that range from small to double-gallon. I still have yet to taste a Louisiana frozen daiquiri but it’s on my list of things to see and do on my next New Orleans.