Driving through central Ontario, along peaceful country roads in Middlesex, Perth and Huron counties you’ll find some stunning examples of Ontario architecture through the yellow brick farmhouses. Some are grand estates and others more modest and quaint, either way, they stand proud as examples of quintessential Ontario architecture. The yellow brick comes from from the rich limestone saturated clay throughout Perth and Middlesex County, manufactured locally and used in most building construction in the late 19th and early 20th century.

The city of London has the most concentration of these yellow brick homes. Like the Painted Ladies of San Francisco, these two story, charming, pale yellow brick, Victorian-style homes trimmed in elaborate, yet sultry cream, wooden detail and characterized by the dramatic front arched stained glass windows dazzle admirers from far and wide. 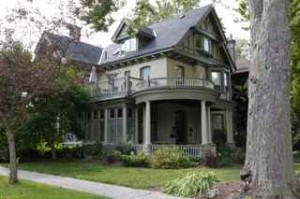 In downtown London, almost every second house is a yellow brick Victorian; the most magnificent examples being on St George Street in the university district. Beautiful lawns with magnificent flower gardens that ruffle the base of the pale yellow houses sit lazily in the shade of towering mature trees; a romantic sight indeed.

In the downtown area around Victoria Park is where you’ll find the highest concentration of the city’s yellow architecture. It’s worth parking the car to walk along Hyman, Queen, Wolfe, Wavery and Grosvenor streets. The stained glass on some homes is simply beautiful and the wooden architectural detail in others, simply romantic; like walking down a magical yellow brick road. 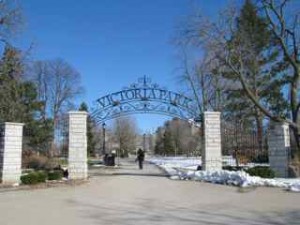 Victoria Park is in Richmond Row, the Yorkville of London. Here there are over 200 eclectic shops and cafes that transform nightly into the city’s lively party scene. Here you’ll find nightclub entertainment, live theatre, jazz and a full selection of dining experiences as well as Centennial Hall, home to London’s acclaimed symphony orchestra.

In the centre of downtown London is the 10,000 seat, John Labatt Centre. Headliners the likes of Cher, Sarah McLachlan and Supertramp rock the area that is now surrounded with exciting new restaurants. Around Talbot and King streets, you’ll find some of the city’s original buildings that now house upscale restaurants, galleries and shops like the classic Kingsmills Department Store with its age-worn wooden floors, interior brass staircase and antique elevator complete with elevator driver.

Right across the street is the new Covent Garden Market, home to the farmers’ market and across from that is Jill’s Table, a culinary destination for hard to find kitchen essentials and amazing cooking classes. Stroll around the corner to the JonaThon Bancroft-Snell Gallery, Canada’s largest ceramic gallery with five showrooms sure to get you all fired up over Canada’s most talented and innovative ceramic artists. Brian and Jonathon pride themselves in creating a unique and creative environment that inspires stirring relationships between artist and collector. They host many artist exhibitions and are also very involved in the 5-day Pride Festival that takes place every July.

Five doors down is Attic Books, Ontario’s largest antiquarian bookstore. It all coexists within walking distances of each other. In fact, London has more shopping space per capita in the downtown core and five surrounding shopping malls than any other town in Ontario.

It’s in this rich and eclectic area you’ll find the original Labatt’s Brewery; another yellow brick building in 50’s factory style. On Adelaide Street North is the Banting House, a yellow brick museum dedicated to the life of Sir Frederick Banting, the man credited with inventing insulin. 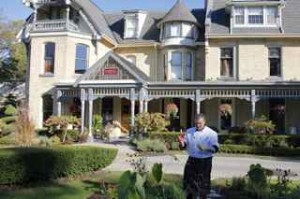 The most magnificent example of London’s yellow brick architecture is the Idlewyld Inn on Grand Avenue. Walk in the front doors and chat with the concierge who will tell you the story of the original owner, Charles Hyman who traveled the world collecting jewels to construct the stained glass windows that were installed in the front doors of the Inn. An interesting man, Hyman was once London’s mayor and the one who introduced the game of bridge to Canada.

The Idlewyld’s magnificent architectural woodwork dominates the grand estate. There are three dining rooms, all bustling with dinner conversation. Co-owner and chef, Alfred Estephan is well known in London culinary circles as an amazing chef and the fact he can serve the many dinner guests from his postage-stamp sized kitchen is nothing short astounding.

A peoples’ chef and you can often see Estephan mingling with his guests when he’s not orchestrating his kitchen. Estephan has no choice but to run a tight ship in his small space. At any time there could be 4 white jackets scurrying around his kitchen, flipping skillets, stirring saucepans, carving meat or hovering inches away from dishes constructing food like an artist creating a sculpture. Globes of shrimp pate are stacked with butter soaked lobster and drizzled with seductive vanilla seafood broth. Luscious pickerel fillets are perched strategically over sweet potato medallions and portions of ultra thick, juicy pork tenderloin are stacked on patties of crunchy potato rosti.

The Idlewyld Inn is a 23-room boutique hotel that offers private, quaint experiences. The secluded back patio with fire pit in the centre of the lush garden is perfect for parties and elegant events.

The city of London is steeped in classic Ontario heritage and a rich edible culture that coexist hand in hand as long as you explore its yellow brick roads.