Toronto Life Magazine ranked it the best restaurant in Canada, but that’s not why I wanted to go. I first read of Toqué (pronounced to-cue) and Grand Chef Normand Laprise in the book, The Perfectionist by Rudolph Chelminski. The book is about the height of Haute Cuisine in France, the greatest chefs Bernard Loiseau, Paul Boucous, the Troisgros Brothers, Normand Laprise and Claude Perraudin to name a few and the conception of the Michelin Star ranking system.

It’s a story of the chefs struggles to reach the top in an impossible world and the affect it has on a person’s soul; all of this as seen through the eyes of Grand Chef Bernard Loiseau. At the end of the book it talks of Laprise moving to Montreal and opening his restaurant, Toqué. It’s here he has earned the designation of ‘Grand Tables of the World’. Who wouldn’t want to go?

That was it for me. Reading about the greatest period in French cuisine and then realizing that I could actually taste it. The fact that I could actually experience the grandiose culinary feats was too much for me. I immediately googled Toqué and conspired to get there. Finally my opportunity arrived.

Jon took an extra long weekend from work, I’d just filed a marathon of stories and we made a reservation. We jumped in the car and was in Montreal in a matter of hours. Here at last, I could almost taste it. The restaurant was within walking distance from our hotel, no coincidence there. We both brought formal clothes and walked nervously up to the restaurant. 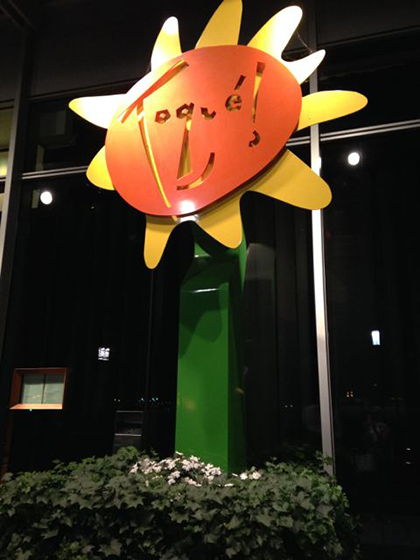 Like the cuisine, the logo is quite surprising, shocking actually. It looks like a 10-foot cartoon image of a metal sunflower with the name, Toqué engraved in the centre of the sunflower. Even though I didn’t know what to expect, it certainly wasn’t the French image of haute cuisine I’d predicted.

We walked through the door and into another world. The hostess, both of them, greeted us with genuine interest and pleasure that put us immediately at ease. One of them walked us to our table and along the way; we were greeted by all of the waite staff. It was like we were emitting a kind of radar and when we got close enough, each of them stopped, gave us their full attention, smiled and greeted us, “bonjour”. We felt like royalty. 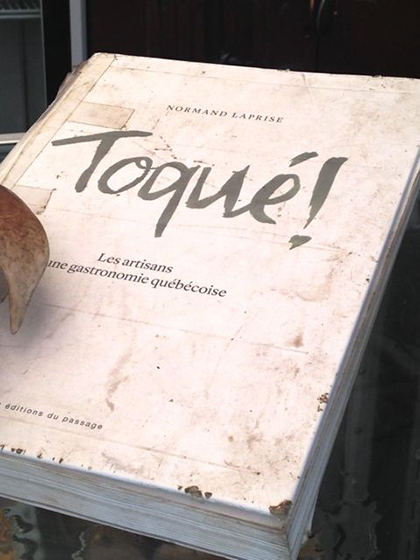 There is a different level of service that goes along with top restaurants. Part of it is steeped in tradition and part in luxury. It’s a true fairy-tale experience that matches the affect of the cuisine.

I say the affect of the cuisine because mere food can’t possibly be worth the money demanded by these top restaurants. It’s what happens to you when you see it, when you smell it, when you taste it, when you savour it and when you succumb to it. Toque is the kind of restaurant that takes really good quality food and turns it into something else, something so unrecognizable the affect on the palate is dramatic, intensified, stunning.

It’s food that imprint on your psyche, tickles the deepest corners of your body, caresses your soul and like kryptonite, leaves you totally weak, yet begging for more. The addictive and aphrodisiac powers of haute cuisine are never to be underestimated.

So here we are, seated at the table and here it begins, we’re handed the menu. At Toqué you have a tasting menu ($122) and it’s whatever the chef feels like making that day, whatever food has been at its prime, whatever has tickled his fancy. You can also order a ‘la carte but who would dare? Like others dining in the room, I’m really here for Laprise. Whatever he wants me to eat is what I’m going to have.