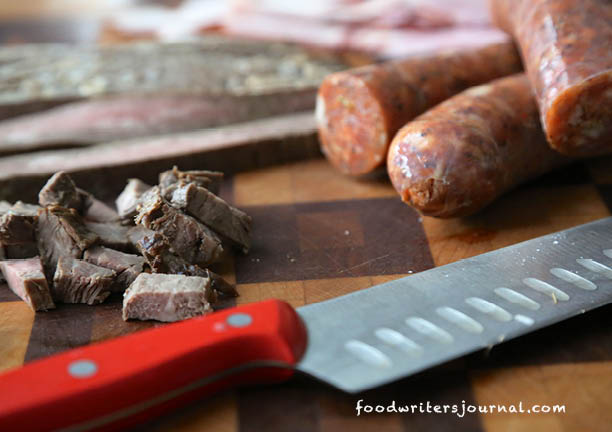 In honour of National Chili Day I’m making chili, and it’s the best chili ever! I have some leftover steak and a few links of delicious sausage – the perfect start to a luscious, hot meal.

Chili con Carne sounds authentically Spanish. But it could hardly be, for the Spaniards had never seen a chili before they reached America. Often referred to as just ‘chili’, it is in fact, authentically Texan!

The official dish of the state of Texas (declared in 1977) it is found on menus throughout the state, especially in the city of Terlingua, the Chili capital of the world. In an average year the state hosts some 15 chili competitions per month; this means there’s a cook-off somewhere in the state every other day, year-round!

Traditional Texas chili is a meat stew in a fiery sauce of chilies, onions, and various Tex-Mex spices. Beef is the customary meat in chili, but it can be made out of anything. Like religion and politics, no one can agree on the one true chili. 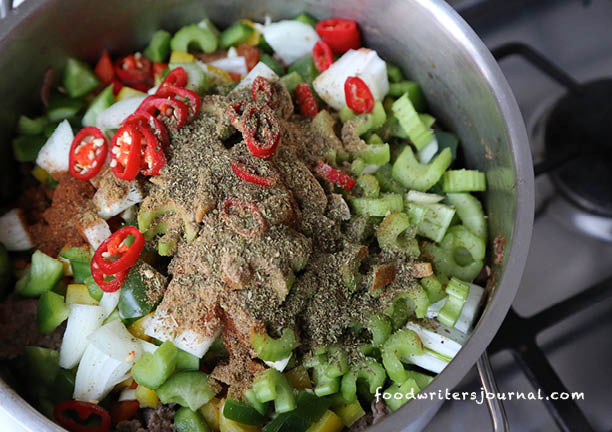 There are plenty of recipes for chili, and each is a truly personal creation. Almost everyone’s first thought after a taste of somebody else’s version is no matter how much it pleasures the throat – they could make it better.

Chili’s restless, ornery, masculine nature is the reason men have made a special effort to proudly claim it as their dish. The word itself calls to mind army camps and cowboy’s and Western chili towns. On a trip to Texas a few years ago I was told, “Real Men don’t eat chili made with fur or rice” (don’t ask!…I have no idea!).

I interviewed a dozen chefs on their chili philosophies and found 12 different styles. Some argued for chunks of beef, while others insisted the beef must be ground. Some said beans, especially red kidney beans are perfectly appropriate; others insisted that beans are nothing more than cheap filler. Some said chili must be made of pure Texan beef, while others were committed to the presence of lamb, mutton, chicken, duck, or anything else imaginable.

The great thing about chili is that everyone can make it. It’s a dish that requires very little culinary skill. This is probably an upsetting concept to those who labor long and hard coming up with complex recipes for the many chili cook-offs that go on in this great country of ours.

Chili making, may not be the culinary art that, say, a good barbecue is. But no one learns anything about making chili unless his or her recipe has been challenged. First, the challenge is to improve on your recipe, and then with other chili-makers, until they get their own true bowl of red perfected. 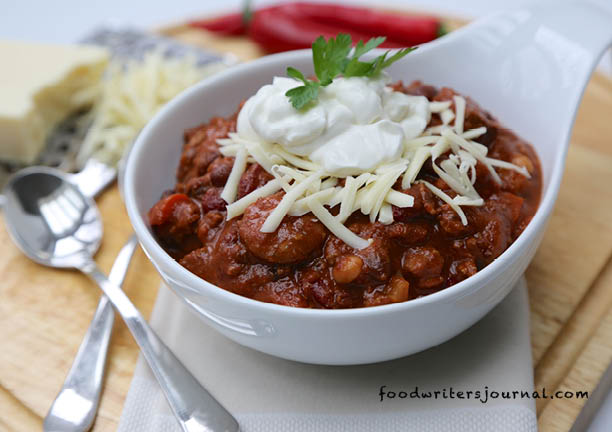 This is a ultra-long list of ingredients, but it’s worth it. This is the best chili I’ve ever tasted!

In a large stock pot over medium high heat, add bacon, sausage and steak and cook for 5 minutes or until almost cooked through. Add the ground beef and pork and cook, stirring for 8 to 10 minutes until the meats are thoroughly cooked and beginning to brown on the bottom of the pot. Add garlic, vegetables and all the spices and cook for 10 minutes until the juices from the vegetables evaporate and brown bits on the bottom of the pot release onto the meat. Add the rest of the ingredients and simmer for 2 hours. Season to taste and serve hot. Makes enough to serve a party of 6 to 8.